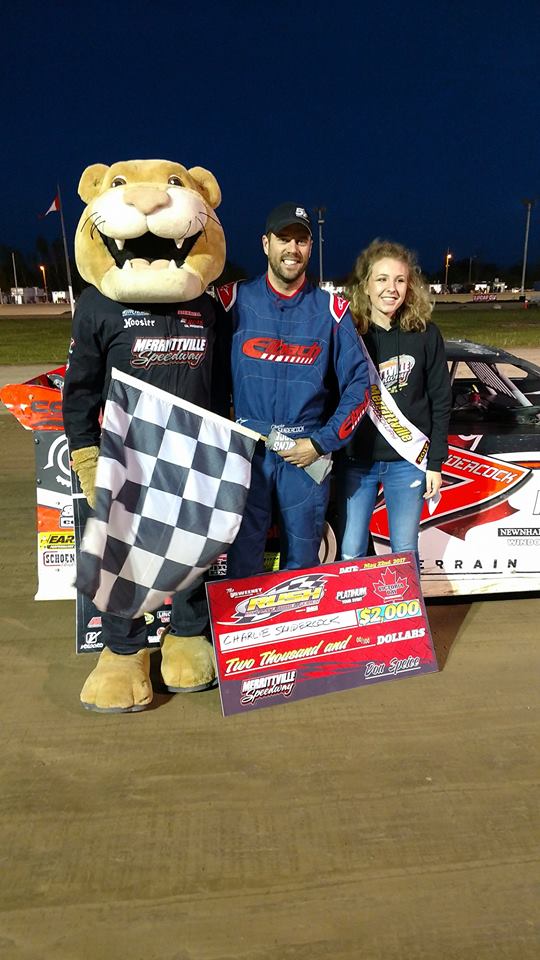 Charlie Sandercock put on a dominating performance in the 30-lap feature to win $2,000; and it was only fitting that he became the first ever Canadian to be victorious in a Sweeney RUSH Touring Series event and doing it on Canadian soil on Victoria Day.  Sandercock's only challenge came from Bryce Davis in heavy lapped traffic right before the event's only caution with nine laps to go.  Sandercock was also chosen as the Maxima Oil "Maximum Performance" award winner after his impressive victory.

"It was starting to get nerve-wracking there at the end," explained the 30-year-old, who made a three-hour drive from Belleville, Ontario to Merrittville.  "There were a lot of heavy hitters there in the first few rows.  I was hoping it would go caution-free.  I didn't even know he (Davis) was there.  I was just trying to maintain my groove.  I have to thank all my sponsors and the whole crew that helps me on the road and helped me get here.  We busted our butts all day, made a lot of changes, and here we are."

Sandercock used the outside to power past pole-sitter John Waters on the start.  Fourth starting Bryce Davis got by Jason Knowles on the opening lap and then began to challenge Waters for runner-up on lap four.  Knowles and Mike Pegher, Jr. joined in on the battle making it a four-car race for second on lap five.  Davis got alongside Waters on laps seven and eight.  The two ran side-by-side with Davis making the inside move on lap eight.

By the time Davis got to second, Sandercock had opened up a half-straightaway lead.  Pegher worked his way by Knowles on lap 11 for fourth.  Waters meanwhile entered the event a winner of four of the last five Sweeney Tour events in Canada including last year's win at Merrittville, but it appeared this one wasn't going to be his night.  Pegher raced side-by-side with the defending Sweeney Tour champion on lap 11 before making the pass for third racing off turn four.

Sandercock was cruising out front when he encountered lapped traffic on lap 13 as the race continued to go caution-free.  Davis began to close the gap on lap 17 and two laps later was on the leader.  Sandercock continued to deal with heavy traffic.  Racing off turn four on lap 21, Davis found a lane on the inside and nearly pulled even at the start-finish line.  A spin though by Mike Greene would prove costly for Davis, who looked like he may take the lead on lap 22.

When green replaced yellow for the final time, Sandercock had a clear track and pulled away.  Sandercock was never challenged over the final nine laps stretching his lead and margin of victory to 2.532 seconds at the finish over Davis, who earned $1,000.  Sandercock became the 28th different driver to win a Sweeney Tour event since 2013 doing it in his Bellevue Fabricating/Deerhaven Farm & Garden/Victory Motorcycles/Newnham Enterprises Windows & Doors/Jeff Harrison Farms/Excel Tower Service-sponsored #57.

"We were one corner away from making that our win," stated Davis- the 26-year-old from Hornell, NY.  "I didn't want to see that caution, but congrats to Charlie- he ran a hell of a race.  He deserves this.  As we got going, I got more comfortable and the car got better, but he checked out after that caution."

Pegher was third for the second straight event.  The battle over the final laps was for positions four through six.  Knowles and Russell King got by Waters on lap 25.  On the final lap, King dove to the inside of Knowles in turn one and made the pass after the two made contact.  After starting 12th, King crossed the finish in fourth over Knowles.

Waters dropped to a disappointing sixth.  Canadian Colton Ledingham was seventh and earned the $100 Precise Racing Products "Hard Charger" gift card after starting 15th.  Canadians Brandon Mowat, Sam Pennacchio, and Rob Pietz completed the top 10.  Brian Knowles finished 14th and was the final car on the lead lap to earn a $25 gift certificate from CrateInsider.com.  After starting fifth in the feature, Chad Wright suffered a flat tire on lap 19 and was selected as the TBM Brakes "Tough Brake of the Night" recipient.