(Pulaski, PA)...Joe Sylvester will be going though quite a transition for 2015.  After spending a number of years competing in the Monster Truck Series, eight to be exact, where he twice set the Guinness World Record for the longest jump in a Monster Truck, Sylvester will take his wares to the Sweeney Chevrolet Buick GMC RUSH Dirt Late Model Series where he plans on running a dozen events for 2015.

That is all Joe plans on doing this season-no other series or races. “I’m only doing RUSH this season because I feel that dirt track holds the brightest future for me as a racecar driver,” said Sylvester, who is expected to make his debut on May 9 at nearby Sharon Speedway.  “I’ve done research on it and I like the professionalism and the way they (RUSH) present themselves and it is a good fit for myself as a racer and for my brand.”

At 31 years of age, the Canfield, Ohio resident developed a passion for racing at a very young age.  That passion blossomed when he started racing BMX bikes in 1995.  For the next 10 years, he progressed to Motocross, Downhill Mountain Bikes, Drag Racing, ATV’s and Go-Karts.

By the age of 22, he became the youngest owner/driver of a professional Monster Truck team.  After eight remarkable seasons in Monster Trucks where he accumulated better than 100 freestyle wins, 70 racing wins, one Monster Jam World Championship-the Young Guns Shootout in Las Vegas, and the two world records (2010 and 2013), Sylvester decided in 2014 to broaden his horizon and compete in short course off road racing in the ProLite class.  It would prove to be a fairly successful season for Joe in TORC, the Off Road Championship Series, where he had a number of top 10 finishes with his best being a sixth place.

“I left the Monster Trucks because the sport is going more towards just becoming a show,” explained Sylvester, who was actually born in Youngstown, Ohio.  “It didn’t allow me to quench my thirst for competition.”

Asked if he’ll ever return, Sylvester said that if anyone breaks his record jump of 237-feet, he would consider getting a truck and doing it again to regain the record.

Besides owning his own race team, Sylvester also has a full service welding and fabrication shop, a business called Joe the Welder.  “I went from not knowing anything about welding to becoming pretty good over eight years,” said Sylvester.  To augment his skills, he attended a motorsports seminar in Cleveland in 2012.

“I learned how to do tig welding,” he said.  “It hones your skills.  If I wanted to survive in the Monster Trucks, I needed to learn how to build my own parts.”

The business that Joe’s family thought he might one day get into is the family’s 57-year-old construction business.  His dad, Joe, Jr., is now the owner of the business.  “I chose a less conventional route as a professional racer,” said Joe III.

In addition to the construction business, Joe’s dad had some racing experience as well when he served as the track announcer at a drag strip- Dragway 42 located in West Salem, Ohio.  “He operated the tree there too,” added Joe.

Joe’s current girlfriend, Cynthia Gauthier, who was born in Montreal, Canada, is also involved in racing as she is a former pro motocross racer.  “She races short course off-road in a 1600 buggy, and will start racing go-karts this year,” said Sylvester.  Cynthia also drives the monster truck called Monster Mutt Dalmation in the Monster Jam Series.  Joe says that Cynthia will have time to do all three since the Monster Truck Series shuts down by mid-April and then do about four off-road races, some go-karting, and travel with him for most of his races.

Clothing is another area that both Joe and Cynthia are involved.  In August of 2014, Joe formed a clothing company called Drive Dirty, The Dirt Road Lifestyle Brand.  The company markets tee-shirts, hoodies, hats, and women’s apparel.  A company in the South does all the printing for them.  Cynthia is also involved with clothing sales as she is a rep for a clothing line called Off-Road Vixens.

“We travel together in our motor home and/or my semi truck and have a merchandise trailer that we take to our races,” said Joe.  There will be a number of times this season that Joe will use his custom lifted pickup truck to tow his trailer.

Another strong point to Joe’s personality is that he loves to interact with the race fans and realizes how important they are for the sport. “I’m very approachable,” he says.  “I will stay after every race and answer questions and give autographs until there is no one left.”

“The fans are the whole reason we’re here in the first place.  Motorsports is competition, but its entertainment.  The fans spend their hard earned money and watch us crazy guys race around the track.  The goal is for them to walk away that night happy and come back the following week.”

As for his fondness of body building, Sylvester said, “I’ve been into lifting weights since I was 12.  It makes me feel good.  When I go to the gym, I point all my focus and energy into it and forget about other things that are happening in my life.  At 5’11” and 255 pounds, Joe says that he’s not in perfect shape, but is hopefully getting close.

Sylvester also has some charities that he is involved including Truckin’ 4 Troops, a charity for veterans who have returned from oversees with physical problems and Alchemy Acres, an animal rescue foundation for dogs.

Joe also has a passion for Pit Bulls.  “I have two right now (Xena and Nitro) and I want to educate people that don’t know a lot about these type of dogs.”  One thing that he is certainly against is anyone who breeds them to fight.  Nitro, the male, comes from champion show dog blood lines.

“I have business cards that I carry around and give to people that has information about the pit bull,” said Sylvester.  “Ban the deed, not the breed” is the saying on the cards.

When asked to describe himself, Sylvester said, “I’m a racer, a bodybuilder, a gourmet cook, and I’m Italian.”  He claims that his food usually gets compliments and it’s mainly his pasta and meatballs.

Joe has also started a You Tube video series that highlights his daily lifestyle, both on and off the track. “I’ll be taping everything I do this year with racing and travelling for my apparel line,” said Joe.  “It will have behind the scenes things, people we meet, and exciting things we do.”

His interests outside of racing and body building are mountain biking, hot rods, and guns.

“I don’t do it nearly as much as I used to,” said Joe, regarding mountain biking. As for hot rods, Joe owns his rig that is a customized Peterbilt.  “That’s my hot rod and my pride and joy.  I love all cars, especially the muscle cars and the hot rods.”

But it’s not all just show for Joe as he utilizes his truck to not only specialize in custom vehicle transport, but to haul flat bed steel for other companies.

His love for guns is limited because of the costs for them and the ammo.  “If it comes down to putting money into guns or the racecar, the racecar wins every time,” he said.  “That’s why I don’t have a Harley now.”

When Sylvester began in Monster Trucks back in 2006 when he was 22, he completely financed his entire racing operation and took out a business loan to form Joe Sylvester Motorsports that he still operates under today.

Being in front of a camera or a crowd of people is something that Sylvester enjoys.  “I’ve done some and want to do some more,” he said.  To date, he has spoken at a Pennsylvania grade school and a few other times for the Universal Technical Institute in North Carolina.

In this his first season of dirt Late Model racing, Sylvester chose to join forces with an established force in the Series, Russ King.  “He’s running my program,” said Sylvester.  “He’s doing everything from maintaining the car, setting it up for the weekends, and transporting it to the track.”

Not having enough Late Model experience with the set-ups is one of the main reasons Joe formed this partnership.  The car will also stay at King’s shop, which is about 30 minutes away from Joe’s residence.

“This will allow me to focus on my racing, building my merchandise brand, and to deliver for my marketing partners.”

He prefers to use the term marketing partners rather than sponsors because he feels there’s more personal involvement with the former.

Eventually, Joe would like to race in the Lucas Oil Late Model Dirt Series.  That is a goal he would like to attain within the next three years, but realizes without additional monetary support, it’s more than likely only a dream.

“It all comes down to me building things myself and getting additional money in the form of marketing partners.  I don’t come from a wealthy background.”

“I don’t let negative influences get into my life,” said the driver of the Drive Dirty #8 Late Model.  “I concentrate on my goals.  This is not a hobby, it’s my way of life.”

“I’m very excited and grateful to have so many of our long-time marketing partners back on board with us for the 2015 season as we focus our racing efforts on the RUSH Late Model Series,” said Joe. “This is new for me and I can’t thank these companies enough for sticking with us and believing in me as a driver and brand ambassador for their companies.”

“We are also looking for new companies who want to increase their brand awareness and exposure through our unique and exciting marketing strategies.” 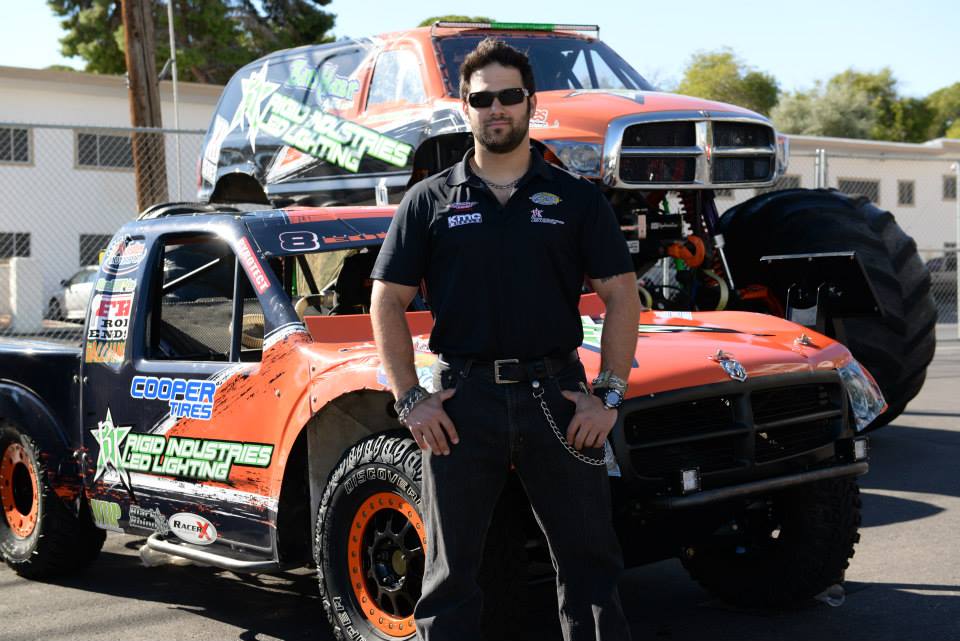