WITH HIS HOME TRACKS POTOMAC & WINCHESTER SIGNING ON WITH SWEENEY RUSH SERIES, JOHN IMLER LOOKS TO CONTINUE TO MAKE A NAME FOR HIMSELF IN THE CRATE LATE MODEL WORLD

Imler, fresh off claiming the Crate Late Model championship in 2013 at Potomac Speedway in Maryland, also snagged his first Crate Late Model victory in 2013 at Winchester Speedway in Virginia.  This success is coupled with his Sportsmanship Awards received from both tracks during his 2013 season. Many racing fans will readily tell you the Tracys Landing, Maryland driver is a champion and well respected driver.  He is a campaigner, or advocate, of Crate Late Model racing, as well.

When the Sweeney Chevrolet Buick GMC RUSH Dirt Late Model Series recently announced it was sanctioning weekly events in 2014 at Potomac and Winchester, Imler felt like it was “mission accomplished.”  Imler, a strong advocate of the RUSH Series, had been pushing for the sanctioning at both tracks. “From the get-go, I have been pushing for RUSH,” Imler explained.  “I’m excited about it; I hope the drivers will run both Potomac and Winchester.  I think the sanctioning will show the drivers the tracks are serious about them.”

Imler plans to compete in the Sweeney RUSH Weekly Series events at both tracks, and he hopes to compete in as many Sweeney RUSH Touring events as his schedule will allow.  Recently, RUSH announced the Sweeney Touring Series will visit Potomac and Winchester, June 20 and 21, for the "Mid-Atlantic States Classic," which pays $2,500 to win and $250 to start each night.  This may be what the doctor ordered for Imler; he is a veteran driver at Potomac.

The veteran campaigner made the move to Crate Late Models near the end of the 2006 season. “Yeah, I was looking to move up.  I was spending a lot of money in Hobby Stocks.  Of course, in the end, I may be spending the same money in Crates, but the equipment is more reliable,” Imler explained.  His early Crate Late Model venture had him competing at tracks like Delaware International, Potomac and Georgetown (Delaware) Speedways.  In 2009, Imler claimed his first track championship at Potomac.

With two championships and a victory in Crate Late model competition, Imler doesn’t look at himself as an all-star driver.  He is, however, proud of his accomplishments, including his solid fourth-place effort in the Sweeney RUSH Tour "Bill Hendren Memorial" on September 28 at Roaring Knob Motorsports Complex. “That is a memory I will have forever.  I was just as happy that night as the night I won at Winchester.  To be able to compete against some of the best drivers in the RUSH Series and have a finish like that was quite an accomplishment,” Imler said.

This feat came close to not materializing as the team’s tow truck had suffered mechanical issues. Prior to the event, Imler’s 2001 Ford F-250 experienced mechanical problems.  Needing a truck to tow his No. 63 Lazer Chassis to the track, Imler rented a 2013 F-250 from Enterprise, and as it is often said- the rest is history.

Imler does what it takes to make his team a success, and he is quick to help others, too.  Imler has given money to track promoters to help with race purses in prior seasons.  “I do what I can to promote Crate racing and will help anyone out with any info I may have,” Imler explained.  With RUSH sanctioning tracks familiar to Imler, he is seeing this come to fruition. “I couldn’t be happier with RUSH,” he said. “They put on a professional show.  RUSH is a very professional series, and I don’t see any favoritism. I’m excited to see how this shakes out at Potomac and Winchester,” Imler added.

Imler’s father began taking him to races when he was seven.  In 1970, Imler went to Beltsville Speedway (Maryland) on Fridays and Dorsey Speedway (Maryland) on Saturdays.  He’s been going to races ever since, and he has made friends along the way.  Chad McClellan, Mark McClellan and Deese are some of the people whom Imler is proud to call friends. “The McClellans have helped me with my set-ups,” Imler said. “I’m fortunate to have gained the respect from a lot of people,” he added.

An electrical contractor, Imler is close to being a “one-man band” many nights at the track.  He receives crew help from Joel Watsky.  Imler’s wife, Lisa, has been instrumental in his career, as well.  “Lisa picked the number (63) for my car.  I was born in 1963,” Imler said with a laugh.  Sponsors for Imler’s team include J&L Electric, Convergence Marketing, Coastal Screen Printing, Keyser Manufacturing, Lazer Chassis and Hollenzcer Construction.

When asked about his first Crate win in 2013, Imler said it felt as if a weight had been lifted off him. “It was a load off my chest,” Imler said.  Perhaps, now, with the proverbial weight gone and an added spring in his step, Imler may be ready to tackle the 2014 season. “I’m psyched to get it going,” Imler stated. 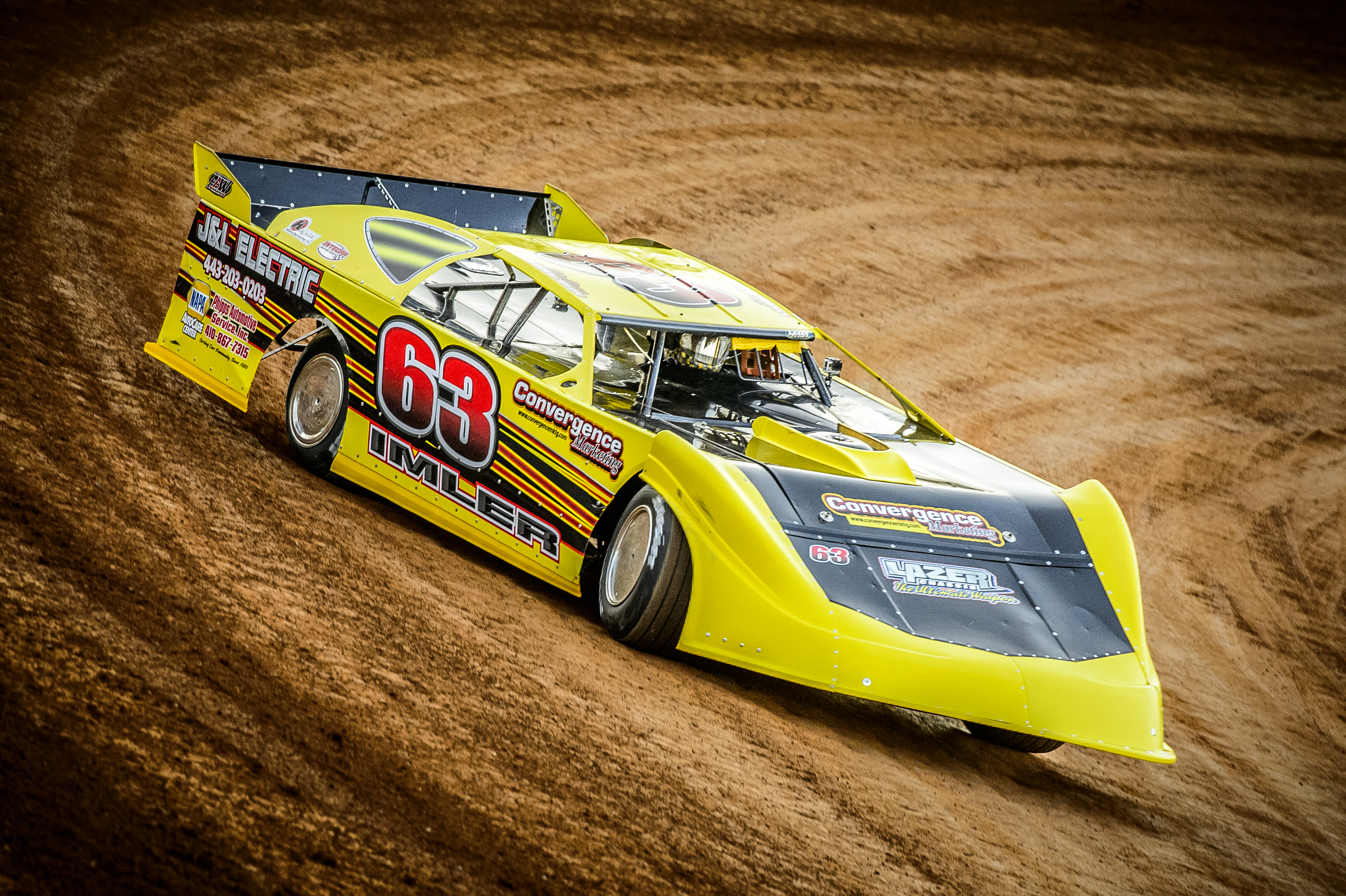