(Connellsville, PA)…Ken Herman knows about adversity, but he continually overcomes it to enjoy success on and off the speedway.  From overcoming a major illness several years ago, to forging ahead with a two-person race team, Herman is now tasting success- a track championship. 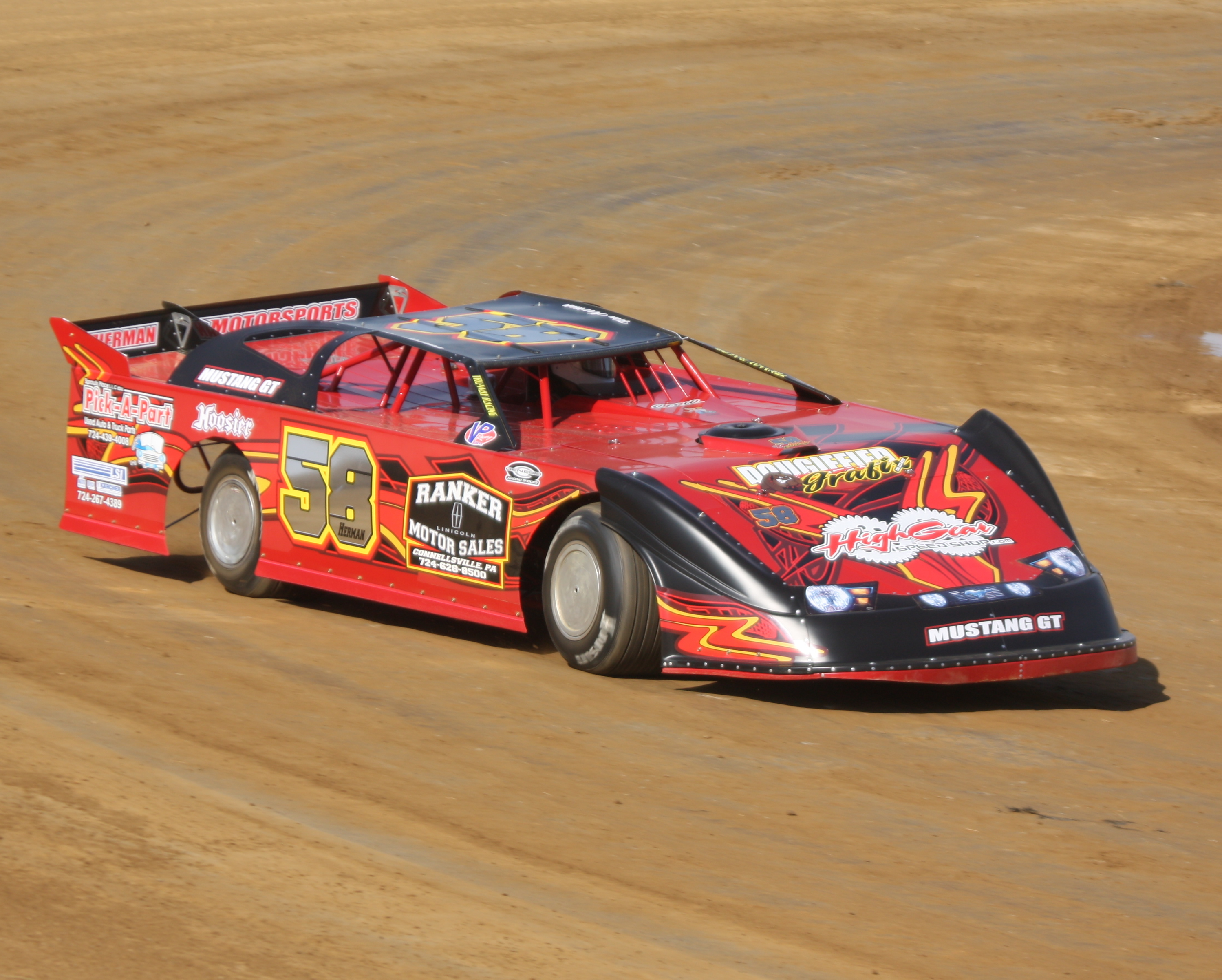 “I feel good about what we did,” exclaimed Herman. “We are a low-buck team that runs on used tires…I have only one crew member (his brother Don), but I feel blessed,” he added.  Herman, 47, is blessed in many ways.  The casual observer may see Herman as a front-running driver who has won a race each of the last two seasons.  He may also be viewed as a driver with a supportive family.  His parents, Robert and Fran, are often joined by family members in the bleachers at Roaring Knob to cheer for their driver every week.  But Herman has been blessed with the gift of life.

Earlier in his career, in 2000, Herman was diagnosed with a brain tumor.  Fortunately, the tumor was operable and successful surgery was conducted at University of Pittsburgh Medical Center. “The surgery went well. I was out for a few months, but the doctor cleared me to go race,” explained Herman. “I still go for periodic MRIs, but everything is good and clear,” he added. Herman said he has no problems with his equilibrium, but he was left with the inability to hear out of one ear.  “I used to have problems making out what a person was saying if they were standing on the wrong side of me, but now I do fine with it.”

Still, Herman has forged onward to a successful racing career.  After spending several years racing Motocross events, Herman delved into dirt track racing.  He began in the Limited Late Model division in 1989 at Pittsburgh’s Pennsylvania Motor Speedway.  In 1996, Herman moved to the 270 Micro Sprint division and claimed wins at Challenger (PA) and 250 (OH) Speedways. He began racing Modifieds in 1997, competing at tracks including Mercer Raceway Park (PA), Sharon Speedway (OH), and Marion Center (PA).  He claimed six wins in that division.  He competed in Modifieds until 2002 when he returned to Motocross racing.

In 2011, Herman received a call from his friend, Robert “Sprout” Cossell, who passed away in December 2012.  “He called me at work one day and told me he wanted to see me back in racing. He said he had something at his shop he wanted me to look at,” explained Herman. After arriving at Cossell’s shop, Herman saw a No. 50C Rocket chassis.  The car had been built for Cossell’s son, Bobby. “We worked out a deal with sponsorship, and I agreed to keep the original wrap on the car. My car number had always been 12, but we changed the zero to an eight, and I became number 58,” Herman said.

Herman was off and running in the Crate Late Model division.  In 2011, he finished second in the point standings at Dog Hollow Speedway (PA).  In 2012, Herman claimed his first Crate Late Model feature at Roaring Knob.  This season, he claimed his second Crate Late Model victory under the Sweeney RUSH Weekly banner.  Entering the season’s final race, Herman entered the event trailing Troy Shields by 16 points in a bid for the championship.

At the race’s halfway mark, Herman was running second and Shields was eighth.  At that moment, both drivers were tied for the points lead.  Herman was passed for second by Michael Lake, and this temporarily gave Shields the points lead.  The next lap, however, Shields succumbed to mechanical issues and retired from the race.  Herman finished third in the event, but he eclipsed Shields by eight points to claim the championship!

“Every time I came off turn two I looked at the scoreboard to see if the number 11 (Shields) was going to show up,” said Herman with a laugh. “I would have rather raced him for it, but I will admit I had a sigh of relief when I saw Troy stopped in the turn.  I wasn’t positive that I had won the championship until they told me on the RACEceiver,” he added.

Herman says he enjoys being known as the Roaring Knob track champion, and he has a few things planned for next season.  “We’re not sure if we are going to stay in the Rocket or if we might purchase a Warrior chassis,” Herman revealed.  “I want to do some more of the RUSH Tour races, too.  I’d really like to go to PPMS and race with them.”  Herman said he will continue to compete weekly at Roaring Knob.

When asked about competing within the Sweeney RUSH-sanctioned division, Herman spoke highly of RUSH’s inaugural season. “RUSH gives a normal person like me the opportunity to compete and not just be a participant.  I have an older car with used tires, but I can compete.  I am living proof,” the track champion said.  Herman finished fifth in the Pace Performance RUSH "Summer Chase" standings, which was worth $750, and his 18th place in the Sweeney Weekly Series earned him $350. “What Vicki (Emig) and Mike (Leone) do with all the different points programs is great,” he said.

Herman is sponsored by Ranker Motor Sales, Sprout’s Place Pic-A-Part Used Auto and Truck Parts, LSI Inc., and High Gear Speed Shop.  His brother will return as Herman’s sole crew member in 2014.  Herman, a maintenance manager in Masontown, Pa., offered a bit of insight from the cockpit of his Late Model.  “My heart is involved in this.  It means a great deal to me.  I get butterflies, but I have fun. I don’t care if a person is a golfer, a hunter, or whatever, I just hope they get that feeling I do when I push that button to start my race car on Saturday nights,” Herman expressed.