DENNIS LUNGER, JR - "LIFE TAKES GUTS" - BATTLING CROHN'S ONE DAY AT A TIME, ONE RACE AT A TIME

(Pulaski, PA)...For RUSH Late Model driver, Dennis Lunger, taking the checkered flag is not the most important thing in his life.  Beating the challenge of a dreaded disease takes front and center for him.

In 1992, Dennis and his cousin Eric Carpenter were on their way as spectators for the Pittsburgher which is held annually at Pittsburgh's Pennsylvania Motor Speedway

“I felt fine all day and then when I got to Zelienople (45 minutes from Pittsburgh), I got a severe pain and buckled over,” said Lunger.  “My body just shut down.  If it weren’t for my cousin, I wouldn’t be talking to you right now.”

Lunger was admitted into St. Vincent’s Hospital where he was released after a few hours with what was diagnosed as the stomach flu.  Two hours later the ambulances were rushing Dennis to Hamot Medical Center in Erie where seven hours later he was diagnosed with Crohn’s Disease and was rushed into surgery where parts of his small intestine and colon were removed.

Crohn’s is a disease that causes intestinal tract blockage.  Following the surgery, there might be a five to seven year remission period.

Round two for Dennis came in 2004 when his weight dropped from 215 to 84 pounds.  The Crohn’s had returned and necessitated a removal of three feet of his small intestine and six inches of his colon.  Three months of recuperation time followed.

Eight years later, the Crohn’s returned for a third time.  Again he would lose two more feet of his small intestine and more of his colon and another two months of recovery.

So now when people ask him how long he’s going to continue to race, the answer is fairly simple.  “Health will dictate everything,” said Lunger.  “Crohn’s never goes away.  After the next one, I may well be forced to wear the colostomy bag.”

The road for Dennis Lunger’s racing career has been nothing short of a very bumpy ride.  First, he didn’t begin his racing career until he was 34 years old.  Secondly, he already had two children and then welcomed a set of twins into the world making racing nothing more than a pipe dream. But when his wife, Beth, gave him the thumbs up to follow his dream of racing after they purchased their Corry, Pa. house, Dennis took out a loan and bought a Spectator Stock to race at Raceway 7.

“We had no luck up there and were leaving every week on a hook,” said Lunger, who was born in Erie, Pa. and now lives in Albion, Pa.  Five weeks later, then Stateline Raceway promoter, Fran Seamens, came to Dennis and asked him why he wasn’t racing at his track.  Lunger told Seamens that he had an illegal aluminum intake, but Fran told him to come and race there anyway.

That would cause a rift between Lunger and his fellow drivers who felt that Dennis was bending the rules and cheating.

Lunger remembers back to a Spectator race at Eriez Speedway in 2003 that became somewhat of a career changer for him.  Following his race, a young lady came up to him and asked if she could drive his car in the Powder Puff event that was to be run later in the evening.  Lunger agreed and she finished second in the race.  That lady (Deseree) turned out to be a friend of the sister-in-law of Reuben Schwartz, who would come on board as Dennis’ sponsor three years later.

“The sister-in-law (Nancy) told Reuben that I was so nice so why not sponsor me,” said Dennis.  The Schwartz/Lunger relationship has been in place ever since. “We are friends,” he said of Schwartz.

Two-thousand and four would be the final full-time season that Lunger raced at Stateline.  Track officials were tired of hearing complaints from fellow competitors about Dennis and said that he needed to move up to the Outlaw Cadet Division if he wanted to continue to race there.

Two-thousand five was a critical year for Dennis as he was forced to park his car and regroup after blowing up two engines in consecutive nights.

Following the demise of the second engine, two Lunger fans, Ron and Don North, stepped up to the plate and provided some much needed financial help.  Their only request was that Dennis stop racing in the Cadet Division and move up to the E-Mods. Prior to season’s end, the team was able to race in one E-Mod event at Eriez.  He would win his heat race and finish third in the feature.

Going into the 2006 season, Schwartz, who now was providing the sponsorship by his company, Schwartz Construction, wanted Dennis to begin racing his E-Mod at Raceway 7 in Conneaut.  Having to travel that distance, however, posed a problem for Dennis since all he had to tow his car was a rented farm trailer.

Schwartz would remedy that situation when he bought Lunger his own enclosed trailer and painted it with the color of his choice, which turned out to be Caution Yellow. “People knew when we arrived at the racetrack,” laughed Lunger. Actually there was a more important reason why Schwartz bought the trailer

The trailer, even though cosmetically pleasing, was actually purchased by Reuben for traveling purposes.  The trailer was equipped with bathroom facilities that Dennis so needed when they traveled.  “Most people who have Crohn’s don’t travel,” said Dennis.

In 2007, Schwartz not only was sponsoring the car, but took on the additional duties as the team’s owner as well.  That’s when Schwartz stepped in and told Dennis that he wanted to move up to a Late Model.

One year later, Lunger won the Chiller Thriller at Mercer Raceway in his first ever Steel-Block Late Model race using a crate engine and then won the Raceway 7 track championship in 2009.

After alternating between an open motor Late Model and the Crate Late Model for four years, Dennis and Rueben decided to run the Crate exclusively in 2013, a season that would turn out to be a banner year for Lunger as he won a total of nine features at four different tracks, won the Sharon Speedway track championship, and won the prestigious “Steel City Stampede” at Lernerville Speedway at season’s end.

The irony to this story is that nine months earlier, there was no guarantee that Lunger was even going to live, let alone race.  In 2014, he went onto win 13 more features and hopes for 20 this season when he races nearly 60 times.  The season got off to a good start as he won the first ever Crate Late Model race in a Sweeney Chevrolet Buick GMC RUSH Weekly Series event at Wayne County Speedway in Orrville, Ohio on April 18.

Dennis chooses to race the #71 because it was his number when he played football and is also the number of one of his dearest racing friends and hero, Ron Davies.  This season, he has painted his cars purple and added a line under the number that says, “Life Takes Guts”.

Besides his own two Crate cars, Dennis has built another this season for a racing compatriot, Jorden Peters of Ft. Ontario, Canada.  For the last four or so seasons, they have become very close and travel together when they can, and pit next to each other.

“It’s been up and down,” said Lunger regarding his health. He also admits to how difficult it’s been for his wife of 31 years, Beth.  To help control the Crohn’s, Lunger is now taking Entivio, a biological drug that boosts the antibodies and helps put the Crohn’s in remission.

“It’s definitely helped,” said Lunger.  Unfortunately the side effects are joint pain.  “I’ve experienced it to where it’s very hard to walk.  Compared to 2012, I’m doing a lot better.  The biggest thing with Crohn’s is the felling of fatigue.  It feels like you’re worn down all the time and it has flu like symptoms.”

But he did say, “If it wasn’t for racing, I don’t know how I would get by.  When I’m in the car, that’s about the only time I don’t feel any pain from the Crohn’s.”

He also says that if it weren’t for his top notch crew, he wouldn’t be able to do what he does. “I still build the cars, the body, the graphics, the tires, and any repairs, but they help me out during the week and on race day and have made my job a lot easier.  Years ago, I did virtually everything by myself.”

His plans for 2015 are to run part time at Sharon with some stops at Wayne County.  He will also race at Raceway 7, a non sanctioned crate track, and on Sundays at Humberstone Speedway in Port Colborne, Ontario, Canada.

As for the RUSH Series, he said, “I like the Series.  I like the rules and they run a tight ship.” 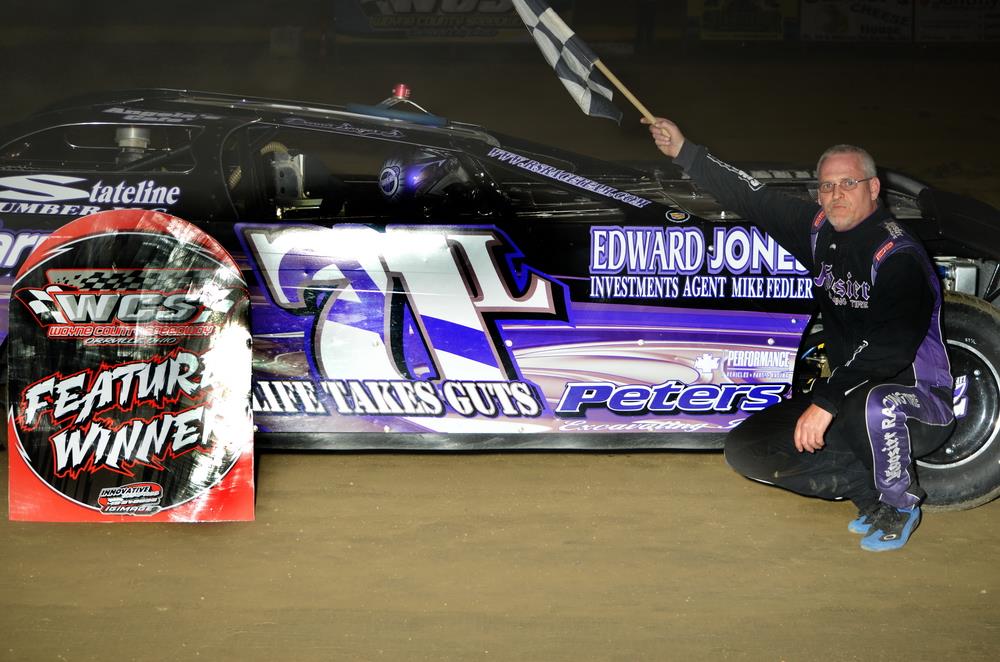