Blair dropped out of Friday night’s feature before returning on Saturday with an impressive performance.  Due to not being at the rained out “World Championship” event back in November, Blair had to start ninth in Saturday’s B main where he raced to second place to transfer to the 100-lap feature.  Blair pitted early on in the event after making some contact in an early race skirmish.  He then would charge through the field advancing as high as second before dropping out of the top five then made a late race charge for a third place effort.  The third place was worth $3,000 and brought his four-night earnings to $6,650! 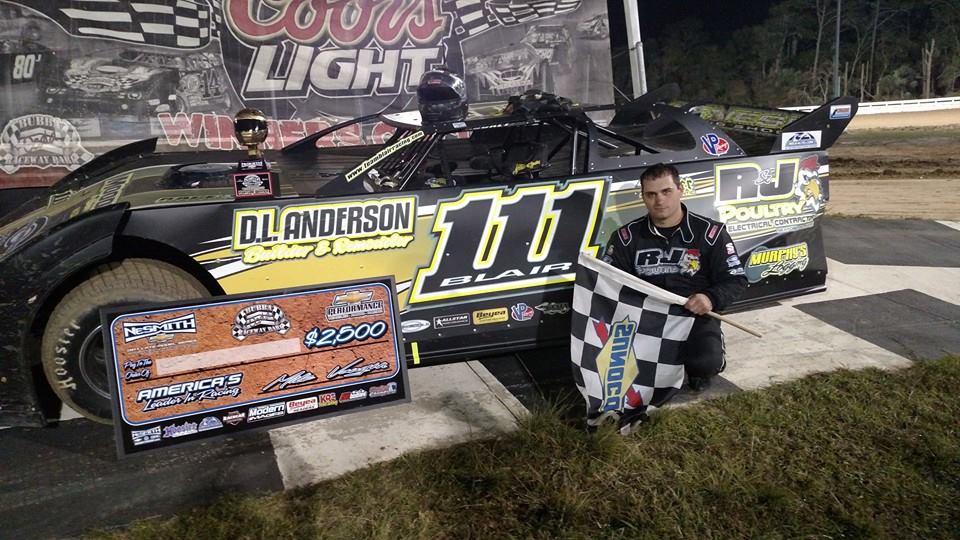 Thirteen-year-old Lake made history on Wednesday night as he became the youngest driver in the 11-year history of NeSmith to earn a Fast Time Award during qualifications!  Lake laid down a 15.755 lap to earn the pole position in the feature event.  Lake led the feature until lap 14 when he began to slide through the field and eventually pulled off on lap 17.  Later information revealed that Lake had seriously jarred his neck resulting in severe pain, which caused him to exit the event.

Lake was back at it Thursday through Saturday where he qualified for all three feature events and recorded three top 15 finishes.  Saturday’s event marked Lake’s first 100-lap feature of his career and he stated earlier in the day his goal was to just finish the race.  Lake did just that and more with a 10th place finish, worth $1,000.  Lake had actually moved through the field and was as high as fifth before having his tires go away late in the race.

Hawkins was aboard the Jerry Haseleu-owned #RJ1 and was able to qualify for three of the four feature events.  His best performance was on Wednesday night when he raced to a second place finish in the 40-lap feature to earn $1,000.  Hawkins had problems in the B main on Thursday and failed to qualify for the feature and then dropped out of Friday’s feature where he was credited with a 20th.  With Darrell Lanigan unable to return for Saturday’s rescheduled “World Championship”, Hawkins inherited the pole position.  He stayed near the front of the pack for the duration and finished sixth for $1,500.

Fresh off an amazing 2014 season that saw Singleton and car owner Clint Enyeart win over 20 feature events in Late Model competition including the Pace “Summer Chase” and “Bill Emig Memorial Wild Card Weekend”, the 2015 season didn’t get off to a good start for the #99*.  Singleton earned his way into the feature on both Wednesday and Thursday night with finishes of 23rd and 17th; however, Singleton was unable to qualify for the feature on Friday night as he fought an ill-handling car all three nights and then headed back north as he didn’t participate on Saturday.

Pennsylvania racers Greg Lemley and Mark Tatalovic made their first ever appearances at Bubba’s.  Lemley, a regular at Roaring Knob Motorsports Complex, competed in all four events in his #4L, but was unable to qualify for any of the features.  Tatalovic participated the first three nights in his #32 without qualifying for a feature, and then helped out in Blair’s pit area on Saturday night.  Tatalovic purchased Tri-City Raceway Park in 2014 and is reopening the half-mile in Franklin, Pa. in 2015 after the speedway was closed for four years.  His son Sam, who will help with the operations at the track, will also compete in the Sweeney RUSH Sportsman Modified Series for the first time this season.

Another northern racer making his first start at Bubba’s was Cody Dawson.  The 20-year-old is beginning his second season of having Max Blair as a teammate.  Dawson is coming off two straight top six Sweeney Touring Series point finishes, but will have Blair with him on the road in 2015 for the first time.  The week started off strong on Wednesday when Dawson’s #36 timed fifth fastest; however, it came to a screeching halt on lap two of the feature when Dawson got into the wall while running sixth ending his week.

The final northern entry was the second #27 Bobby Lake Motorsports car, which was driven on Thursday by Over, and on Friday and Saturday by Horton.  Over was making his first start in a race car since a scary barrel-roll flip in his own #K2 on June 21 in Sweeney Tour event at Winchester (VA) Speedway.  Over was credited with a 19th after dropping from the feature on Thursday, while Horton turned in a pair of top 10 finishes including a sixth and a ninth to earn $1,650.

“Three years ago when Mike Vaughn and myself formed an alliance between Sweeney RUSH and the NeSmith Series, it was our goal to work together on a daily basis for the betterment of Crate Late Model racing, not only in our own individual regions but throughout the entire country, stated RUSH Co-Director Vicki Emig.  “In just a short period of time, this alliance, that features an identical technical rules package including the Hoosier Crate Racin D21 and D55 spec tires, has already allowed competitors from as far north as Brighton, Ontario, Canada and into the deep south to easily and successfully participate in major events such as this and of course our upcoming ‘Crate Racin USA Late Model Nationals’ in June.”

“I believe the theory is obviously working as our RUSH competitors were in the mix each and every night setting fast times, winning a feature, and turning in several top 10 finishes as they battled some the best Crate Late Model racers in the country,” continued Emig.  “It would be impossible to tell you how proud we were of each and every one of our guys' performances- they were simply outstanding!”