(Springville, NY)…It’s no secret that veteran racer Paul Grigsby is really looking forward to the 2014 racing season.  The Springville, NY driver has two speedways right in his backyard joining the Sweeney Chevrolet Buick GMC RUSH Dirt Late Model Series as weekly-sanctioned for the upcoming season.  Both Humberstone and Freedom Speedways are race tracks that Grigsby has a lot of laps on and when added to the already weekly RUSH racing at McKean County Raceway, he is ready to make a run at the Sweeney Weekly Series championship.

In 2013, Grigsby won three features at Humberstone (Port Colborne, Ontario, Canada) and if weren’t for some unfortunate circumstances, he most likely would have won the point championship.  Grigsby also made 10 starts at McKean (East Smethport, PA) with four top 10 finishes including a season best fifth on July 26.  Freedom (Delevan, NY) meanwhile will return to life after a two-year hiatus thanks to new promoter Troy Shuknecht.

“We plan to race as much as my job allows at all three of the race tracks, especially Freedom and McKean,” noted the veteran, who has a very demanding job as a Federal Agent along the Western New York and Canadian border and his work schedule definitely affects his race schedule.  “A lot of times I am heading out of work in Niagara Falls, NY at 4 PM and racing to get to the racetrack; luckily I have a crew that gets the race car to the track and ready when I arrive- sometimes just in time to jump in and go racing!  Unfortunately sometimes I get scheduled to work four to midnight on a race night and don’t even get the chance to be there, but with all three tracks RUSH-sanctioned, I definitely want to try for the weekly championship.”

Paul grew up watching his father Dan race on pavement at Holland Speedway.  Some 23 years ago, Paul purchased his first car and ran it at Holland for two years before converting it to dirt and racing at the then dirt track in Perry, NY along with Freedom in the Challenger class (comparable to today’s Street Stocks).  Paul then graduated to the Super Stocks and ran for six years with the BRP Series before deciding to move into the Late Model division.

Grigsby purchased his first Late Model from Ripley, NY’s Mike Knight and on the way home from picking up the car, received a call and was offered the job as a Patrol Agent, which meant he had to go to Georgia for six straight months of training!  “That was tough,” stated Grigsby.  “I wanted to race the car, but knew that the job offer was way too good to pass up, so I ran it a couple of times, went to Georgia and suffered all summer.”

Grigsby convinced his wife Stacy to fly him back in July to run a couple of shows, but it was a long summer for Paul with little to no racing.  The following year he concentrated on the open car by attending a three-day private driving and chassis school with legendary Late Model driver Dale McDowell.  While at the school, he raced at Volunteer Speedway (Bulls Gap, TN) in the 100-lap Spring Thaw event under the guidance of McDowell.  Through that experience, he started to get more competitive.  He qualified ninth at the World of Outlaw (WoO) show in Canandaigua and finished 11th in the feature, and also qualified for the WoO feature at McKean, while racing as much as his schedule allowed at McKean, Little Valley, and other tracks that he could get to.

“Again, it was tough to get any rhythm going with the open car based on my schedule and what tracks were within reach,” explained Grigsby.  “I have to put my vacation requests in for the entire year in October of the previous year, when no schedules are even out yet.”

In the meantime, Grigsby decided to get a second car with a crate motor and started running the second car in 2011 while still running the open car.  Midway through 2012 at McKean, Grigsby suffered the worst accident of his career, which ended up putting him in a crate car full-time.

“We were starting in the back of a qualifying race and I went three-wide on the back stretch and my right rear got clipped and turned me around at the fastest point on the race track,” explained Grigsby.  “At first I thought, ‘Damn, now I have to start all over in the back again, and then realized I was not slowing down once I hit the grass on the top of turn three, and before I knew it I looked up and a bunch of people were standing in front of the car, I could smell a heavy amount of sod and right above my head was a part of the guardrail.  The car was bad; in fact Ed Carley told me it was the only time AAA ever delivered a race car to his shop!”

At that point, Grigsby had to make a decision on whether to concentrate on the open car or take his crate motor out of the wrecked car and put it in the other car and continue with the crate and ultimately that was the option he took.  “I finally just sold my open motor, so I know that I am totally concentrating on the crate car now,” said Grigsby.

Grigsby had a pretty good year in 2013 and looks forward to the coming year in his Ed Carley Motorsports/Chrome Dragon Customs/Race-1/Bruce Thompson-sponsored #24 Rocket Chassis.  “Humberstone has a great surface; it usually is wide open during the heat races, and then gets black and slick by feature time.”  Despite missing some weeks at McKean, he finished 11th in their RUSH Late Model points in a class that averaged over 25 race cars per night.

“I really have to thank all my sponsors, my wife Stacy, and my entire crew for working as hard as they do for me,” expressed Grigsby, who owns 20 career feature wins.  “I definitely could not do it without their support and dedication.  I am glad that Humberstone moved to RUSH sanctioning, and Freedom is re-opening and sanctioning with RUSH.  I want and expect the Series to devote a lot of time and resources to tech on the cars.  It’s great to know when you get to the track that as long as the tech is right, everyone is on a level playing field.”

Grigsby is a quiet, calm guy, but it’s evident that he is passionate about his racing and wants to excel in the sport he loves.  “I am not a guy who ever gives myself much credit,” revealed Grigsby.   “I wish I could race more than my job allows, but this job has given me a better financial opportunity to be more competitive and that’s a good thing.  Luckily, I just happen to be on vacation when the 100-lap (Sweeney Tour) race is scheduled for Pittsburgh, so we are going to give that a shot.”

Based on Grigsby’s passion, enthusiasm and desire, it would not be surprising to see him in a Sweeney Chevrolet Buick GMC RUSH Dirt Late Model Series-sanctioned race victory lane in the near future! 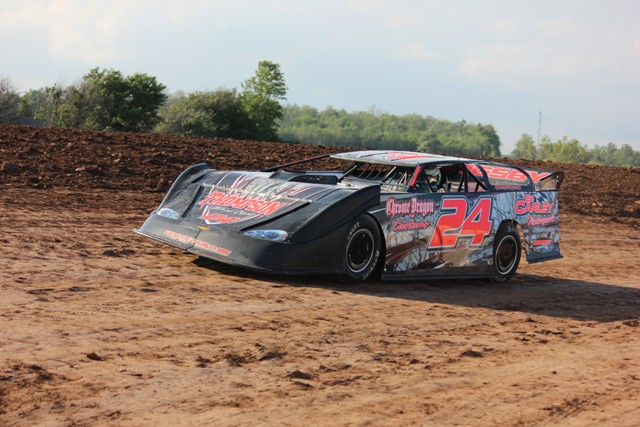